Since the Arab spring, youth have been politically active in Asia through various modes. Regime revolution or failed takeover on 15 July 2016, in Turkey is its vibrant example. However, it’s unfortunate that the political perception, intention or attitude of youth towards democracy have not been included in the process of policy making. As a result, youth activism in politics remained unrecognized. Therefore, present work is an effort to explore democratic attitude of youth in Pakistan. The state of Pakistan has been selected because 64 % of her population comprises youth. Current study examines democratic attitude through four major independent variables: economic growth, democratic values, public participation and political stability. Data was collected from the respondents who were in between 18-35 years of age by distributing a survey questionnaire which was adopted from the literature. Data was analyzed through SPSS version 24.0. Result of the study suggests that all the developed hypotheses were accepted. Additionally, study finds that despite massive corruption, social injustice, favoritism, nepotism, political instability, economic crisis and many other problems, Pakistani youth overwhelmingly considers democracy, as the potential form of government and dislike any alternative of it. Current study may be the first stone in the stagnant water not only in measuring democratic attitude of young generation but it will also help them to understand what sort of democracy is needed in Pakistan. 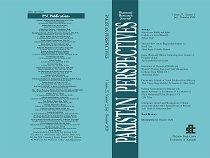